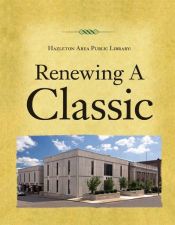 Precision Design was chosen by the Hazleton Area Public Library to coordinate the announcement of its “Renewing a Classic” capital campaign, which aims to raise $1.3 million. As part of the contract, Precision Design also created marketing materials for the library’s campaign.

The materials included a 12-page campaign image book as well as pledge cards and envelopes. Agency staff worked with library and campaign officials to write the book’s text, which included an introductory letter from the campaign’s chairman, an explanation of need, information on the library’s branches, the library’s history, testimonials from frequent library users on the importance of libraries and a call to action with information on how to donate.

Precision Design staff also took photos at the library and its branches to use in the book. The shot list was previously arranged with campaign leaders to ensure that the book would feature a variety of interesting images throughout the book. The design includes those photos as well as more detailed lists of information.

The agency undertook multiple video shoots at the library and its branches and produced a video of approximately 8 minutes in length to explain the campaign’s goals. The video is available for viewing in YouTube and will be shown by library and campaign officials at speaking engagements to increase awareness of the campaign.

Precision Design staff also coordinated an event to announce the launch of the campaign. The agency invited local and regional media and prepared a press release with detailed information on the campaign. The event, which featured a showing of the campaign video as well as the feature film “The Young Victoria,” was well attended by potential donors as well as media, helping spread the word about the campaign throughout Greater Hazleton and northeastern Pennsylvania.

© Copyright 2019. Developed by Precision Design
Back to Top