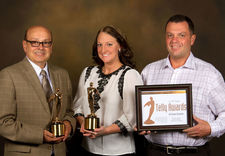 Precision Design created the award-winning television and web advertising campaign for Carrato Surgical Associates of Hazleton. The agency received a bronze award for its testimonial campaign featuring videos of five patients of Dr. Anthony Carrato. The other award winner was a piece titled “Jessica’s Story,” in which Jessica Rodriguez, pregnant with twins, told her story of bleeding internally from an ectopic pregnancy and how Dr. Carrato saved her life and her surviving twin’s life.

“The Telly Awards has a mission to honor the very best in film and video,” said Linda Day, executive director of the Telly Awards. “Precision Design’s accomplishment illustrates the agency’s creativity, skill and dedication to its craft and serves as a testament to great film and video production.”

David C. Haupt, president of Precision Design, said, “This campaign featured just five of the many patients whose lives have been saved or made better through the surgical skills of Dr. Carrato and his physician’s assistant, Alycia Pavlick. The patients’ stories were compelling and emotional as they recalled how Dr. Carrato helped them through the most difficult times in their lives.

“It is an honor to be recognized by the Telly Awards for our work. The Precision Design staff strives to create individual, personalized solutions for each client. The campaign for Carrato Surgical Associates was the result of our collaborative effort in developing ideas, working with the patients to tell their stories and editing the videos to present them in a way that would capture the hearts of viewers.”

The Telly Awards was founded in 1978 and is the premier award honoring outstanding local, regional and cable TV commercials and programs, the finest video and film productions, and online commercials, video and films. Winners represent the best work of the most respected advertising agencies, production companies, television stations, cable operators and corporate video departments in the world.

A prestigious judging panel of more than 500 accomplished industry professionals, each a past winner of a Silver Telly and a member of The Silver Telly Council, judged the competition, upholding the historical standard of excellence that Telly represents. The Silver Council evaluated entries to recognize distinction in creative work. Entries do not compete against each other; rather, they are judged against a high standard of merit.

The testimonial videos can be viewed at www.carratosurgical.com.

© Copyright 2019. Developed by Precision Design
Back to Top